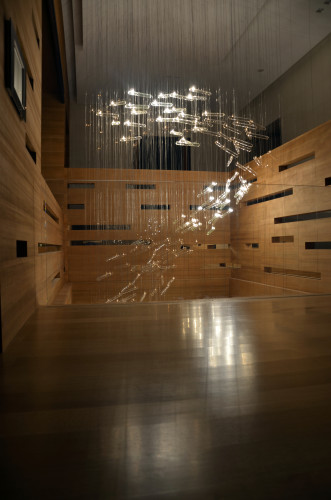 FLYLIGHT is an interactive light installation by Studio DRIFT, composed of on average 200 glass tubes. The glass tubes light up and respond to a viewer. Like schools of fish the birds fly as if they were a single entity, creating complex continually shifting patterns. The behavior is an example of “self-organization” where no one bird leads the group. Rather each individual is reacting to the speed and direction of the few birds immediately surrounding it. Amazingly two birds never collide.

Flylight is based on the behaviour of birds flying – the happenings you see in the sky that you can look at for hours. In fact, those patterns are caused by the fact that no bird wants to be at the front of the group or to the side, so they are constantly challenging each other for best position. We programmed the DNA of that idea, and replicated it through technology. Flylight brings a lot of energy to a space because it is constantly changing, moving and surprising. At the same time, Flylight can be very soothing as well as the light passes the bulbs poetically. — Lonneke Gordijn


Digiluce was involved in Flylight from the beginning. Starting from the notion that the installation should somehow mimic the bahaviour of flocks of birds, we developped an algorithm and custom electronics. Flylight premièred on Dutch Design Week 2009 and has since been commissioned by high-end Art Fairs around the world. Permanenet installations of Flylight include private homes in Moscow and Dubai, and an office building in Eindhoven.